Amidst feeling some existential angst, my friend died of an overdose on 1/9/17.  Things started to decline then. The path that had been cobbled before me brought me to this perfect zenith. It was here that I was able to feel all of the pain and trauma that I have ever experienced. I could see it. I could taste it. Everything.

By summer, I had all but given up. I was tired. I’d been in treatment for months. I’d tried several different cocktails to treat my bipolar disorder, anxiety and PTSD. Nothing was working and it was terrifying. I have been diagnosed since 2006, I’ve been experimenting with medications off and on since then. I know that SOMETHING should have happened, there should have been some sort of SOMETHING. I was on these meds for months and I only experienced side effects.

I was that gone.

I felt like I was standing in the center of a very large room in the dark. It was so dark and so quiet my ears rang. My breathing was always sharp as if anticipating. The darkness cloaked my shoulders and traveled with me. Deadpan humor became uncomfortably morbid humor. No words spoken for days. Opening my eyes and choosing to live each day was a task. I was exhausted.

I found myself burning myself with cigarettes. It is far more intoxicating than cutting. I’d never done that before.

I was hospitalized in July. The last time I cut myself the area was about the size of an index card. I still had the area bandaged when that fight happened. In my chest I knew it was going to escalate even though he swore he just wanted to talk. I was so angry. The things he would say were not necessarily blatant, I was never called out of my name. I would hear things about my character. I would hear things about my beliefs and the fiber of who I am. My ideals. I was laughed at and called sensitive when my feelings were hurt. One of those jabs struck and my ears started ringing. Everything in my body wanted to run into the bathroom and grab my kit. Something felt different. 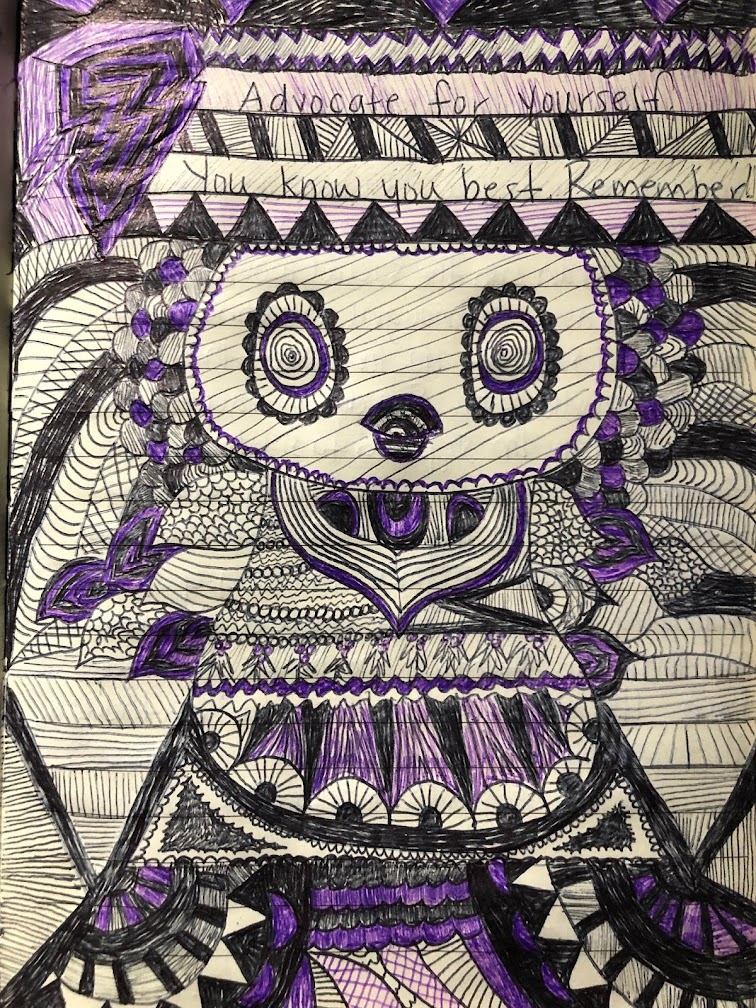 Instead of harming myself, I packed a bag with everything that I’d need including my new journal that I reluctantly purchased. I said not one word to him, which would later be brought up in court. I left a note for sleeping Mason.

I got an Uber and went to the hospital. It was a shit show. I’ll tell that story another day. I do remember being chastised on the visitation day. He came. I didn’t allow anyone to visit me any time I’ve been hospitalized. This was a first. We sat in the storage room that also served as the office (I told you it was a shit show—Hi, Psych Institute of Washington.) It seemed like a sweet conversation. It sounded like he was tired of arguing. It sounded like he was resolving to put a stop to it and actively choose to be kind and respectful so that we can repair. Something about the timing of the conversation was unsettling. Instead of discussing exactly what happened that night, instead of discussing how I felt, instead of discussing after care plans, this is what he brought to me. I was told that I needed to take treatment seriously. I’d eventually be told that it was all fake, all of it. The hospitalization, treatment, my “effort”.) I was made to feel like the problem. I was made to feel like I needed to be fixed in order for the relationship to work. In the back of my mind I found that to be so incredibly hurtful.

I felt so small sitting in that room with him and another couple of people within earshot.

Maybe it is all my fault, I thought.

I went back to my room and wrote a letter apologizing to him.

Within the first few days of my discharge he picked another fight. Again, the timing. His timing. My hospitalization was a farce, so much so that I had to file complaints. I felt exactly how I felt when I checked myself in. Fighting and verbal attacks were exactly what I needed. That was basically the entire month of August. We took a family vacation in the middle of it and it was excruciating. I remember sitting across from him at some point and explicitly telling him that I believe he’s crossed a line. I explicitly expressed that I believe that he has become increasingly abusive in his actions and words. It didn’t change anything, it continued to escalate.

His gaslighting was spectacular. It was so good I had to look it up even though I know exactly what it is.  I had to look up so many things that I already know. I needed to see it in front of me. After talking to a good friend, I decided that I didn’t want to do couple’s therapy like I’d been damn near begging to do. I wanted us to communicate and discuss the best way to separate in a healthy way.

He ended the relationship the next day.

The following week I was dragged across my bedroom.

Within three days there was a temporary protection order and he was gone.

I wanted to separate. I didn’t want this.

I didn’t yet see that it was necessary.

It took well over a dozen people including my therapist and my child to say things that brought me to a clearer realization. All of the characteristics of an abused person were present but I was so in it I did not see (prime example). I wanted to let him come back so many times. So many times. I was terrified. I am terrified. I came to see that I needed to make a move and follow through. My son’s eyes were open, I had to open mine too.

9/10 I ask for space to decide how to move forward, he involves cops, I get a temporary order of protection and temporary custody

10/29 custody mediation, he does not show up

11/5 custody hearing, he shows up, after mediation I walk away with what I asked for. My son is with ME.

1/5 he has moved into his own apartment, I sent his property

There is so much for me to process. This whole situation has broken open a dam. I have compartmentalized my pain and trauma my entire life. It is the sole reason that I did not end it years ago. It has helped me to survive. It’s broken now and I am feeling, I am remembering, I am processing. I feel the weight of it all. I see it everywhere. The kind words are appreciated but please keep the praise. I do not feel brave.

“It’s almost over”, I whisper to myself often.

I haven’t decided exactly what “it”means yet.

I just want to breathe again.