Science says that alcohol thins your blood. They’re not lying. I have a vivid image of my bathroom tiles smeared with blood. I didn’t expect to see that much. It wasn’t alarming or anything. I don’t think I’d ever seen that much blood before. He helped clean it up. I remember feeling joy that he saw it. I remember staring at the side of his head. My eyes etching “you did this” in his flesh.

I wrapped it up with gauze. I spent several weeks this summer walking around with gauze or bandages. Nothing was subtle this time. It wasn’t one of those “at least I can wear long sleeves” situations and I was okay with that. I knew that I was in trouble. I didn’t feel like anyone fully grasped just how far I had deteriorated.

That red blood was a sign of life. I couldn’t decide if I was relieved or disappointed.

Cutting has a delayed gratification for me. The pain of the incision is satisfying but it’s the warmth of the blood that really does it. You can watch it congeal and darken. It leaves traces even when you wipe it away. I always find that poetic.

I first cut in 2008. The love of my life ended our engagement. I had to return to New York from DC with my tail between my leg, a college drop out with an assault charge and a poorly treated mental illness. I next cut in 2009. I was barricaded in my bathroom. My ex was napping on the couch. Earlier he’d chased me around the apartment, cornered me in the kitchen and choked me up against the wall. I think that was the third incident. I next cut in 2010. I was pregnant. My suspicion that he was cheating were confirmed. I was eventually induced because of the stress that followed that discovery. The cutting was replaced with drinking after post-partum kicked in. I didn’t cut again until August 2017 after a volatile cruise that marks the moment that our relationship began to decay. Spring 2018 to Summer 2018 I cut three times and burned myself with cigarettes a half dozen times. It’s very interesting seeing the increase in frequency and severity. It’s interesting to see the correlations.

Fun fact: Hospitalization has been on the table three times in our relationship. Each incident was preceded by a volatile blow up between he and I. The first hospitalization was preceded by an argument about me feeling unappreciated and that my work a stay at home was invalidated. I remember him using his body to prevent me from leaving the room. The argument had gotten hot and he doesn’t argue fair. I wanted to leave. I tried to push by him and I couldn’t. I hit him and when he recoiled I ran into the bathroom. He tried to force the door open while I tried to force the door closed. I got it closed. He punched the door and splintered it. I went to the hospital shortly after. After a very ugly fight with him, I took an uber to a hospital. I was unable to commit myself. He called and insisted that I didn’t need to go to the hospital and that I should just come home. I tried a second institution, it looked shady. I played what he said over and over in my head as I sobbed in the passenger seat of my friend’s car. I went home. The third instance, I went back to that same hospital that didn’t take me. A good friend met me and took me back to the shady place. This circumstances surrounding this were discussed in breathe again.

I didn’t recognize these behaviors, these thoughts, the severity of my decline as anything other than me being sick. I was not able to see how the external factors affected these things. My therapist asked me very early on if I felt that my relationship was negatively affecting my mental health. I laughed and adamantly said that I don’t believe that. I brought this up to him. I laughed as I shared what she said. He actually looked at me said that he agrees. He believes that yes, our relationship has a negative affect on my mental health. I remember not having words. I didn’t respond. I just looked at him.

In retrospect, that moment is a moment that should have been more jarring.

When I sit with that, it makes me feel ill. Because in my head I am trying to understand how you’re aware that our relationship which is cyclically volatile and peppered with verbal and emotional abuse has a negative affect on my mental health to the point of hospitalizations and self harm BUT you don’t change your behavior or your role in it? You continue? You escalate? What does that say? I think I know what it says but I feel nauseous allowing the words to touch my tongue.

I think about this often. I see the evidence every single day. Those scars are going to take a long time to heal. Both the ones that I cover with clothes and strategic angles and the ones that no one can see. I knew I was in trouble. The harm was escalating. Deeper, messier. I felt like I was going to die. 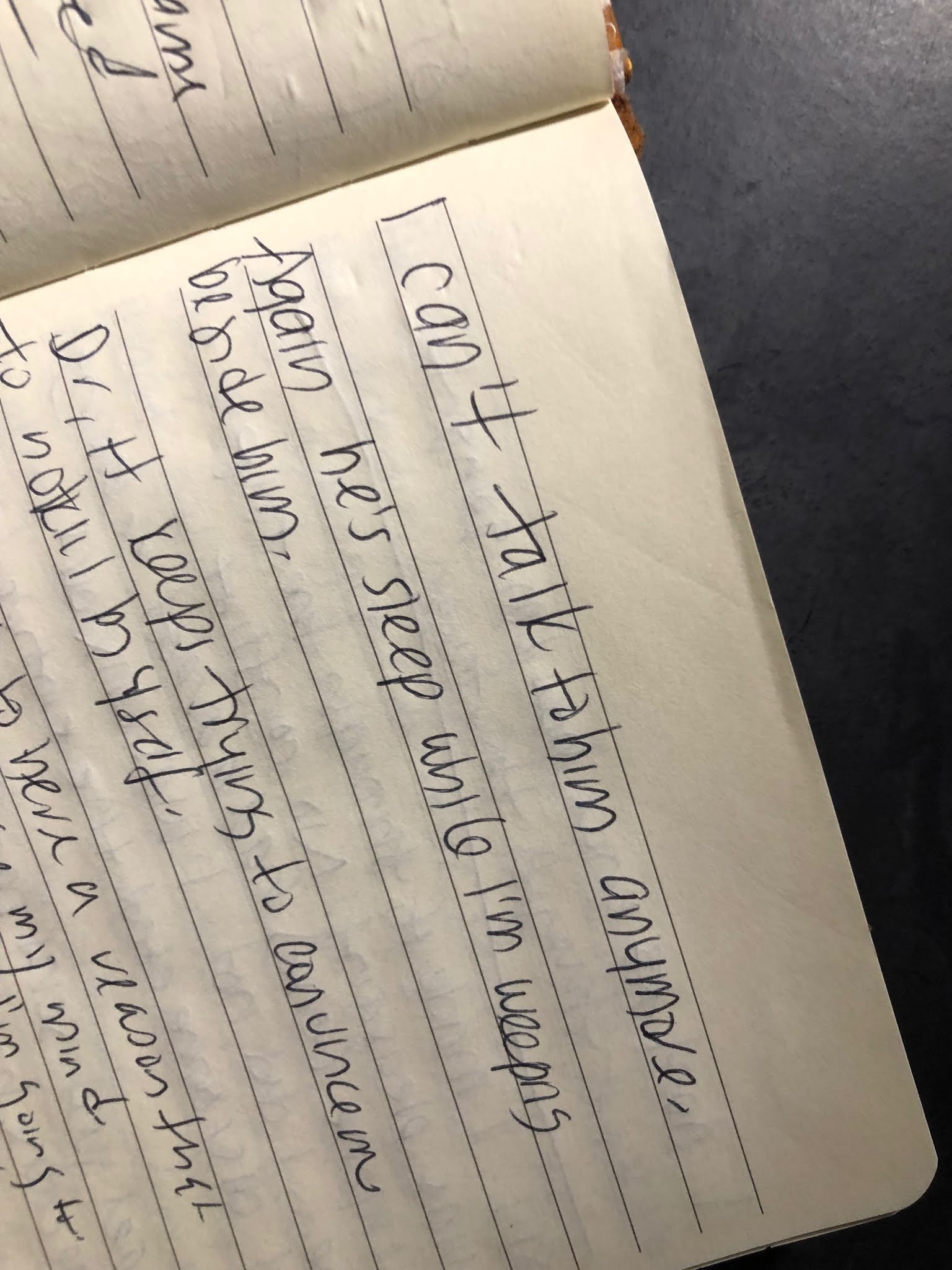 I had a lot of personal existential pain and worry that became exacerbated by the depression that I fell into and the weight of the harm and dysfunction on my chest. I carried this relationship and I was berated when I set it down. I don’t regret that. I accept that it did not serve me, it did not fill me and it did not build me up. I just have to remind myself that how I experienced this relationship is valid. I will not be gaslit anymore. I won’t be quiet anymore.

There was just too much calm without holes in walls or dishes thrown. Too quiet. No cornering, no grabbing. No otherwise undeniably fucked up behavior had me foolishly complacent.

When he dragged me across the room, it was not that bad. At least he didn’t…….

I tried to reason with him and I ask for space. He refused and brought the police into our home to fight to stay in the apartment. I just wanted space. Some time. Let things calm down so that we can figure it out. Ultimately the officers advised him to leave and advised me to file a report and get a protection order. That was not what I set out to do. After talking to my therapist and a few friends I was convinced to follow through. Once that ball was in motion it was over.

The person that I knew vanished. He walked out of the door with two police officers in September and I’ve never seen him again. I don’t see him when I look through my pictures. I didn’t see him in court.

Until this day I spend too much energy considering his feelings in all of this, his thoughts. It shouldn’t matter. It is going to take along time to unravel this. I have to consider why I need him to acknowledge that something was wrong. He and his attorney implied in court that because it wasn’t physical it wasn’t that bad. I asked him specifically about an incident when he threw a mug at me and it shattered. The ceramic shards fell into the playpen that Mason was in. This was 2011. 2011. He looked me in the eyes and said it never happened. I had pictures in my Dropbox until Summer 2018. I deleted them because I needed space. I said it was needed anymore. My memory was fuzzy, it’s all coming back. I want that to be clear.

I lean back and chuckled when I recall that he was embarrassed to pick up our son from school after the custody order was put in place because they have his picture and a copy of the protection order. Embarrassed. Embarrassed because “the school and his teachers have an order saying I’m an abuser of you and obviously a danger to my son. I’m good. Can I please get him from the house?” Embarrassed. But not remorseful. Things like that are very sobering.

Prioritizing my wellness and my healing is hard and I have to fight to remind myself that it is what I need to do. I have to fight the compulsion to protect his name. No one knew about the cheating and the true reason Mason was born early until 2018. Why am I protecting him? Who is protecting me? That was his job and he harmed me. I have to consciously remind myself of these things. I have to unlearn, I have to re-remember, I have to be honest with myself. I have to keep my eyes on what’s real and not allow my heart to cling to the image I painted for almost ten years. I can’t be worried about hurt feelings, bruised egos or whispers.

Being mad at the truth is futile.

The truth is not tarnish.